Posted on 7th January 2021
Leading British designer, Paul Smith has commissioned two armchairs from lounge chair designer Andrew S Johnson to be upholstered in colourful Paul Smith for Maharam fabric.
Two versions of Johnson’s B-9 armchair were ordered for Paul Smith’s Willoughby house shop in Nottingham. The chairs were upholstered in crimson Assembled Check pattern from the Paul Smith for Maharam collection. This partnership represents Paul’s continued championing of emerging design talent, as well as a link between the two Nottingham designers.
Andrew S Johnson is a luxry furniture designer based in Nottingham, England. His latest collection, the B-9 range, consists of an armchair and a chaise lounge. Handcrafted from powder-coated aluminium the pieces are unapologetically strong; standing tall against whichever background they are placed. Their imposing shape demands focus, but the soft touch semi-aniline leather gives the pieces a kinder appearance. This contrast between hard and soft neatly mirrors the contrasts that frequently appear in Paul Smith’s design work, further emphasising the link between the two.
“My inspiration for the B-9 Collection is the solid, silent existence of infrastructure that surrounds one in a cityscape,” says Andrew. “This is a minimalistic and sophisticated piece for the modern person.” 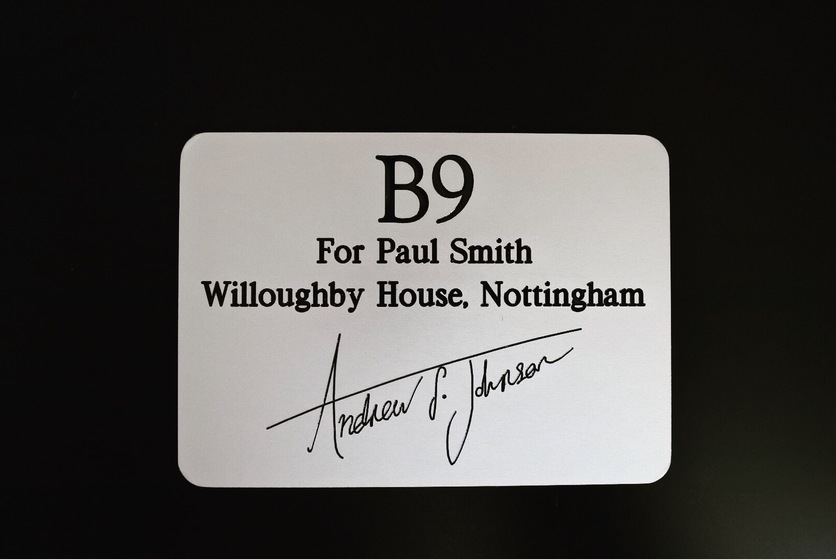 The B-9 collection will be limited to 200 armchairs and 200 chaise lounges, with a four-month waiting list from order.
The two armchairs produced specifically for Paul Smith Willoughby House featuring an engraved plaque underneath, displaying key details and the designer’s signature retail at £2,500 each.
Tagged as: Commercial Interior Design, Paul Smith
Share this post: